When a brave new idea emerges in the boating world we at Motor Boat & Yachting try to maintain an air of healthy scepticism in our reports.

The truth is that so few of these designs make it into mass production. However, it seems like the Quadrofoil electric jetski will be one of the few.

This bold idea was met with a strong response when it was unveiled October. And over the past four months its preview video has attracted more than 650,000 views on YouTube.

Now the Slovenian firm has announced plans to put this electric jetski into mass production, after the first 12 pre-orders were placed.

The Quadrofoil will be built in the Solvenian town of Slovenska Bistrica by Austrian firm Alumero Group.

Alumero produces solar panels in five factories across Europe and its Slovenian arm generated €3.8m of revenue in the second half of 2012.

It is estimated that the two companies will create 100 new jobs in the town by 2017.

Manfred Rosenstatter, CEO of Alumero Group, said of the deal: “We will expand our production portfolio with a unique, ecological and progressive product.

“Quadrofoil is a highly emotional product with significant potential for the future,” he added.

As we reported last year, the Quadrofoil will be powered by a 5.5KW electric motor and should reach a top speed of 21 knots when foiling.

Its 10KWH battery pack can be fully charged from flat in under two hours at a cost of less than £2. It has a maximum cruising range of around 50 miles.

Since the deal with Alumero Group was only announced this week, Quadrofoil’s target of delivering the first completed models in March seems a bit tight.

However, CEO Marjan Rožman insists that his firm will honour this pre-order promise.

“There are still several tasks in front of us, before we can ensure delivery at the end of March. However, I am absolutely certain that we will make it,” he said.

This author hasn't written their bio yet.
admin has contributed 9 entries to our website, so far. View entries by admin. 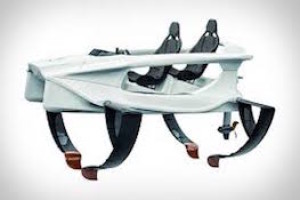 Quadrofoil: first all electric hydrofoiling watercraft With a myriad of[...] Clean technology The watercraft comes with an all-electric outboard motor[...]

Your email is safe with us.

We're not around right now. But you can send us an email and we'll get back to you, asap.

Experience something completely different. The most inovative watercraft on the market. Buy One Today!